Love of God: Is the Creator a God of Love?
Is there such a thing as the "Love of God?" Is the Creator a God of love? Or is He an angry God? Is He passive and complacent? Or has He revealed His demeanor at all? Christians believe in a God of Love. They feel as though God has proved His love towards man through the gift of His Son, Jesus Christ, who suffered upon the cross as a propitiation for our sins. Truly, to die for another is proof of your love. "Greater love hath no man than this, that a man lay down his life for his friends." (John 15:13). However, does Christ represent God in His death upon the cross? Did Jesus even die upon a cross? Did He even exist as an historical figure at all? Or is He merely a myth -- a good story about a good man?

Love of God: His Love Revealed
Christians claim Jesus Christ reveals the Love of God. Did Christ even exist upon the earth? John Murray, president of the American Atheist Society is quoted as saying this about the historicity of Christ, "There was no such person in the history of the world as Jesus Christ. There was no historical, living, breathing, sentient being by that name. Ever. The Bible is a fictional, non-historical narrative. The myth is good for business." (Life Magazine, December 1994, "Who was He?" pgs. 67-82). However, millions of believers claim He did, and still does, exist. So, what did history actually record? According to the testimony of ancient historical authorities such as Cornelius Tacitus and Flavius Josephus it seems that perhaps Murray may be mistaken. Both men independently documented the crucifixion of a Jesus Christ in the 1st century AD. These men, both living during the 1st century, are accepted historical authorities outside the Bible. In addition to their accounts and those of the New Testament writers, the Jews themselves have documented in their writings the execution of a Jesus in the 1st century as an historical event.

Love of God: His Love Foretold
The death of this man Jesus Christ does not demonstrate the Love of God, unless He was indeed the Son of God. If Christ were a mere man executed for crimes against the state, this has nothing at all to do with God. Once again, we must look towards historical accounts for validation. The Old Testament, written over a period of more than 1500 years, was finished approximately 400 years before Christ. The earliest known copies to survive the ravishment of time date to approximately 200 years before Christ (the Dead Sea Scrolls). Much of the Old Testament claims to foretell the coming of Christ. There are over 300 prophecies concerning a coming Messiah who would die for the redemption of mankind, proving God's love towards fallen man. Jesus Christ fulfilled these prophecies completely and consistently. In fact, Christ fulfilled over 30 prophecies alone on the day of His murder. These predictions were incredibly detailed and accurate, including the form of his execution and even His last words (Psalm 22).

For an example of this stunning foresight, the Book of Daniel (chapter 9, verse 25) foretells the very day Christ would enter Jerusalem before his trial and crucifixion. The prophecy states: 69 weeks of years (69 x 7 = 483 years) would pass from the decree to rebuild Jerusalem, until the coming of the Messiah. (This is according to the Babylonian 360-day calendar, as Daniel was written in Babylon during the Jewish captivity.) Thus, 483 years x 360 days = 173,880 days. According to records found by Sir Henry Creswicke Rawlinson in the Shushan (Susa) Palace, and confirmed in Nehemiah 2:1, this decree was made on March 14th, 445 BC, by Ataxerxes Longimanus. Exactly 173,880 days later, on April 6th, 32 AD, Jesus Christ rode into Jerusalem upon a colt (fulfilling Zechariah 9:9). The world celebrates this day as Palm Sunday. Four days later, Christ was murdered upon the cross, and three days after His death, He rose from the dead. After showing Himself to His disciples, admonishing them to persevere despite persecution from this wicked world, He ascended into Heaven to await the end of this age.

Love of God: His Love Manifested Through His Only Begotten Son
Jesus Christ is the Love of God. "In this was manifested the love of God toward us, because that God sent His only begotten Son into the world, that we might live through Him. Herein is love, not that we loved God but that He loved us, and sent His Son to be the propitiation for our sins" (1 John 4:9-10). 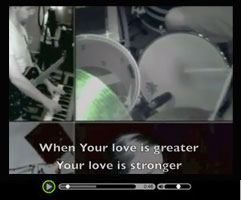