Where is God? The Ultimate Question
Where is God? Have you ever asked that question? Most of us have at one time or another. Its answer has more to do with His presence in our lives than with belief in His existence. We want to know -- where is God when I hurt, or where is God when something goes desperately wrong in my life? Our conclusions depend on what we rely on as a benchmark for truth in our lives.

Do you believe the Bible is true, and that it is what it claims to be? If you do, then you recognize that it is the very Word of God. What a great place to begin looking for His presence.

Where is God? How Can I Know He Exists?
Where is God? If this question still needs to be settled in your mind, consider the evidence for God in His creation. Genesis 1:1 says, In the beginning God created the heavens and the earth. Do you believe it? Look around at the evidence. Psalm 19:1-2 tells us: The heavens declare the glory of God; And the firmament shows His handiwork. Day unto day utters speech, And night unto night reveals knowledge. God wants us to know He exists. Where is God? We see Him in what He has created.

Do you believe that God wants you to see Him? The Bible says He does. He reveals Himself to us. Psalm 98:2 says, The Lord has made known His salvation; His righteousness He has revealed in the sight of the nations.

God reveals Himself to us through His creation (see Romans 1:20) and through His Word: All scripture is given by inspiration of God, and is profitable for doctrine, for reproof, for correction, for instruction in righteousness (2 Timothy 3:16).

Finally, God desires us to know Him so much that He took on the form of a man, in the person of His Son Jesus Christ. Consider these words from Paul in Philippians 2:6-8: Who, being in the form of God, thought it not robbery to be equal with God: But made himself of no reputation, and took upon him the form of a servant, and was made in the likeness of men: And being found in fashion as a man, he humbled himself, and became obedient unto death, even the death of the cross.

John, another apostle, helps us understand that Jesus is the same God who created the universe when he says In John 1: In the beginning was the Word, and the Word was with God, and the Word was God. The same was in the beginning with God. All things were made by him; and without him was not any thing made that was made. In him was life; and the life was the light of men… And the Word was made flesh, and dwelt among us, (and we beheld his glory, the glory as of the only begotten of the Father,) full of grace and truth.

We can see God in what He has created; we can see Him when we read His Word; we can see Him in the person and character of Jesus Christ. Jesus came to help us understand God, and to assure us that God understands us. John goes on to say: No man hath seen God at any time, the only begotten Son, which is in the bosom of the Father, he hath declared him. (John 1:18). Jesus declares His existence and further reveals the truth about God.

Where is God? How Can I Relate to Him?
Where is God? There's a popular song that says God is watching from a distance. Or you may have heard Him referred to as a higher power, the man upstairs or a divine imminence. But the Bible tells us He is a person, and that He is near. James, a man history records as the brother of Jesus, tells us that if we draw near to God, He draws near to us (James 4:8). What more could we ask? Does that give you a picture of being cuddled? It should - God longs to cuddle you in His arms.

Have you believed God is waiting to judge you? The Bible says He longs to forgive you. Over and over throughout the pages of Scripture, we read of His longsuffering nature. From Genesis through Revelation, we see a consistent picture of a God who continues to offer forgiveness, up to the very end of time. He is not willing that any should perish, the Bible says, but that all should be saved. The reason He sent Jesus into the world is so that we could all be saved! (John 3:17). Religions teach us we need to earn God's favor. The Bible tells us God's favor is a gift. All He is waiting for is for us to admit our need. Once we confess our sin, His forgiveness is ours (1 John 1:9).

Near the end of the Gospel of John, just before He was crucified, Jesus told His disciples about a comforter He would send, to remind them of all the things He had taught. That comforter, the Holy Spirit of God, came at Pentecost, just a short time after Jesus ascended into heaven. In the first chapter of Acts we read about that event as His disciples were filled with His Spirit and began declaring the Gospel message.

What this means for you and me is that once we confess our sins, receive God's forgiveness and accept the gift of salvation through Christ, we can know the presence of that Comforter, too. With His Holy Spirit living in us, His nature gradually overtakes our own. As that happens, others will begin to discover where God is by knowing you. 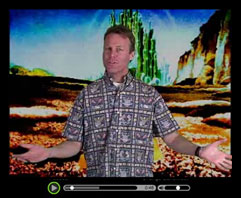 Play Audio - Where Is God?