Home >> I’d Rather Have Jesus

I’d Rather Have Jesus

The words, I’d rather have Jesus, moved George so much and spoke to him about his own aims and ambitions in life. He sat down at the piano and began singing them with a tune that seemed to fit the words. Shea’s mom heard him singing it and asked him to sing it at church the next day.

George’s life direction did change. He was offered a popular music career with NBC, but a few years later chose to become associated with evangelist Billy Graham and sang this hymn around the world.

Than to be a king of a vast domain
Or be held in sin’s dread sway,
I’d rather have Jesus than anything
This world affords today.

He’s fairer than lilies of rarest bloom;
He’s sweeter than honey from out of the comb;
He’s all that my hungering spirit needs,
I’d rather have Jesus and let Him lead.

I’d Rather Have Jesus – The Bible’s Support
This hymn is about dedication and commitment. To follow after Jesus is costly. Matthew 16:24-26 says: “Then Jesus said to his disciples, ‘If anyone would come after me, he must deny himself and take up his cross and follow me. For whoever wants to save his life will lose it, but whoever loses his life for me will find it. What good will it be for a man if he gains the whole world, yet forfeits his soul? Or what can a man give in exchange for his soul?’” I’d rather have Jesus than silver or gold...

Philippians 1:21 reminds us: “For to me, to live is Christ and to die is gain.” I’d rather have Jesus and let Him lead...

Philippians 3:8 says, “What is more, I consider everything a loss compared to the surpassing greatness of knowing Christ Jesus my Lord, for whose sake I have lost all things. I consider them rubbish, that I may gain Christ.” I’d rather have Jesus than world-wide fame, I’d rather be true to His holy name...

Praise God for the words of Rhea Miller and the caring of Bev Shea. Because of them, George followed after Jesus and we are blessed with the fruit. 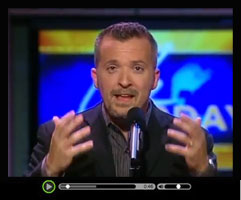