Home >> Jesus is the Only Way

Jesus is the Only Way

Jesus is the Only Way – Do Christians Really Mean That?
Is Jesus the only way to God?

"Jesus answered, 'I am the way and the truth and the life. No one comes to the Father except through me'" (John 14:6).

"For since the creation of the world God's invisible qualities—His eternal power and divine nature—have been clearly seen, being understood from what has been made, so that men are without excuse" (Romans 1:20).

Is Jesus the only way to God? For the person who begins to “get” Christianity, but has not yet become a Christian, the question often arises, “But, what about those who live in deep Africa or Tibet or somewhere else, and have never heard of God? Do they go to hell, even if they are good people?” Do Christians really maintain that Jesus is the only way?

Jesus is the Only Way – The True Concept of Salvation
How can Christians say that Jesus is the only way to God? The problem with this question is that it is based in a concept of salvation by works. In other words, the person asking it still believes that people can get to heaven by being good enough. Scripture says this is decidedly not the case:

“Therefore no one will be declared righteous in His sight by observing the law; rather, through the law we became conscious of sin” (Romans 3:20).

“All who rely on observing the law are under a curse, for it is written: ‘Cursed is everyone who does not continue to do everything written in the Book of the Law.’ Clearly no one is justified before God by the law, because, ‘The righteous will live by faith’” (Galatians 3:10-11).

Since no one is good enough to get into heaven—if they were, then Christ’s sacrifice would have been meaningless, and the entire Christian religion is empty and void—then we must rely on our faith in the One True God, and allow ourselves to be saved by His grace.

And God clearly states that He will judge our hearts. “For the LORD searches every heart and understands every motive behind thoughts. If you seek Him, He will be found by you; but if you forsake Him, He will reject you forever” (1 Chronicles 28:9b).

And He promises us that we are all valuable to Him and will not and cannot die without His permission. “Are not two sparrows sold for a penny? Yet not one of them will fall to the ground apart from the will of your Father. And even the very hairs of your head are all numbered. So don’t be afraid; you are worth more than many sparrows” (Matthew 10:29-31).

Jesus is the Only Way – What Does Jesus Say?
When Christians say that Jesus is the only way to God, they base this on the words of Christ in Scripture. From Scripture, we also know that God will judge our hearts. God also knows our opportunities. The person who grows up having never read Scripture or having never been introduced to Christ, but is devoted to the god under whom he was raised, may have an excuse—I say "may" because something inside them (the Holy Spirit that tugs on everyone's heart—see Revelation 3:20) should guide them into a belief that their religion is false, or at least that something is wrong with it. It is something they may struggle with their entire lives.

If you grew up in one of the myriad cultures that performed ritual human sacrifice as a form of worship, then something inside you should say that is wrong. The same with someone who only knows Islam, Buddhism, or any of the tribal religions still practiced around the world, but less obviously. Something inside—the Holy Spirit that you seek—should make you uneasy with any sort of strict adherence to the false religion.

“Come near to God and He will come near to you” (James 4:8a). As those immersed in culture come to realize that there is something different—something more—out there for them, then God—who knows their hearts and minds—will “come near to” those that He knows will accept Him. And He will make His just judgment based upon His infinite wisdom and knowledge of each person. The problem I have with this question is that it always seems to be a cop-out. It’s generally posed by someone not yet ready to accept Christ as their Savior, and they want to pose one of those “unanswerable” questions as a delay tactic. To which, “Jesus replied, ‘You are in error because you do not know the Scriptures or the power of God” (Matthew 22:29).

If they truly have a heart for the lost, then they would not only rush to accept Christ, but they would sign up for any one of the thousands of missionary programs throughout the world. They would run off as soon as they could to tell those people about the God that sacrificed His only Son for them, or at the very least devote time, energy, and money to support those missionaries that do seek out these types of cultures.

Jesus is the Only Way – The Heart of the Matter
How can Christians say that Jesus is the only way, when there are people in parts of the world who have never heard about Jesus? Once you get to the heart of a question like this, you see that it rarely—if ever—is even a question at all. The fact that they are even around posing the question demonstrates that they aren’t so much concerned with “those poor people that never heard about Jesus,” but rather are looking for ways to either delay or get out of making a commitment to the Living God.

The Bible doesn’t speak to this issue, because we are commanded as Christians to “go and make disciples of all nations” (Matthew 28:19a). What we are supposed to do is tell the world about the God that saved us—and if He truly did, isn’t it natural to tell people about it? I mean, if someone saved you from a burning building, you would tell everyone. How much more so should we tell people about the eternal salvation God has given you?

If we are doing what we as Christians are supposed to do, then we needn’t worry about those that may not have heard the message yet. Because we both understand our God, and know that He is powerful enough to present Himself to all, “so that men are without excuse.” 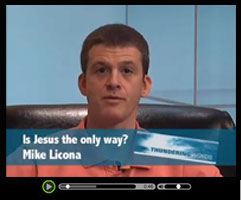